Today's soundtrack:
"A Plea From a Cat Named Virtute" by The Weakerthans
"We Suck Young Blood (Your Time Is Up)" by Radiohead
"Brandy Alexander" by Feist

Last week, I went to Ottawa for a conference. I delivered my Tristram Shandy paper first thing in the morning on November 5th, which also happens to be Tristram Shandy's birthday. That reference probably escapes the majority of you. Savages. In fact, you folks probably only know "Remember, remember the fifth of November" from a) V for Vendetta or b) "The Hollow Men" by T.S. Eliot. My money's on the former. Conveniently enough, Parliament was right down the street from the conference hotel, but since no one had a stick of dynamite, we contented ourselves by drinking to Tristram Shandy's health. Shockingly, I didn't get to the Hill until the last day of the conference.

I took the afternoon off and set off with my camera to do the tourist thing. First stop, Parliament.

I went up the Peace Tower with an elevator full of Mexican university students who'd escaped Montreal for the weekend with their parents, who were visiting. It's odd, but it really feels like I speak more Spanish than English when traveling in Canada. Contrary to Lou Dobbs, I happen to think this is a rather lovely development.

After the Peace Tower, I went on the free tour of the building. After reminding the tour guide that Borden was our other wartime prime minister, I pressed my nose up against the windows as I looked into the House of Commons (the Opposition side, naturally). I half-expected to see paper airplanes and spitballs discarded under the chairs, but I imagine they get cleaned up after every Question Period. 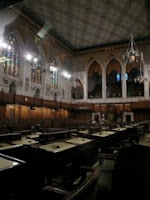 The Library, which was the next stop, was the most impressive part of the tour. It's the only part of Parliament that didn't burn down, which is amazing when you consider that it's all wood and paper. The floors, the woodwork, the stacks and stacks of books left me speechless. I wanted to jump the barrier and dig into the card catalogue, but the security guard looked formidable, so I resigned myself to taking an obscene amount of photos and contemplating my chances of winning a seat in the House so that I could (legally) wander through the stacks. 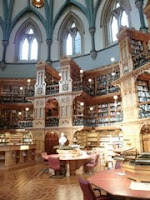 The Senate, which has never held much appeal or interest, was nice enough. What made me giggle, however, is the stained glass ceiling in the foyer in front of the Senate. The first few Senate Speakers had their names up there, but eventually, one of the Speakers decided that this practice would soon run out of space, so he put up a panel for himself and all future Senate Speakers. 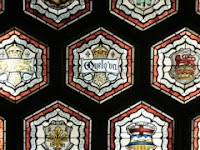 Now, this should translate to "somebody," which in itself is typical of Canadian understatedness, however a closer look of the French reveals a deeper problem. It should be "Quelqu'un". They misspelled the French, which, if I'm not mistaken, is also typically Canadian.

After Parliament, I walked over to the Byward Market, which is really just a bunch of restaurants. And restaurants aren't nearly as much fun when you're exploring on your own. So I hit a nearby Starbucks and wandered the Rideau Canal with coffee in hand.

The Canal is actually a lot narrow and shallower than I thought it'd be. It's actually quite quaint. 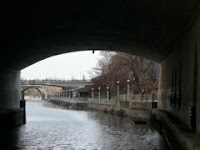 The stairs from the Canal lead right up to the War Memorial, which was next on my list. In the middle of an intersection (a very European location, I must say) there is a great space given over to the Memorial and a little plaza in front. 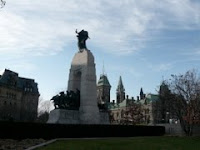 There was an older gentleman standing in front of the Tomb of the Unknown Soldier, looking quite morose. I kept my distance, taking photos of the monument itself. After he'd moved off, I noticed he'd slipped a photo of (I assume) a fallen Canadian soldier from the War in Afghanistan. I moved off a bit, down the steps, and watched in near-horror as a group of 20-something giddy Canadians laughed and posed in front of the memorial for pictures. Shaking his head, the older man left and I walked back towards the conference hotel.
Posted by Kate at 11:05 p.m.